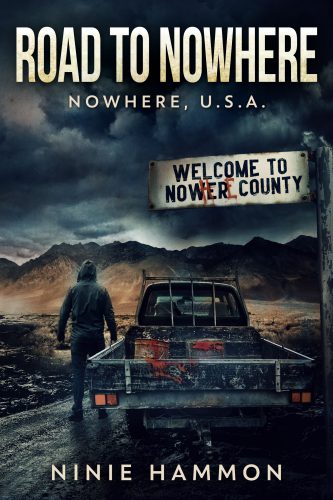 The sorceress of psychological suspense, Ninie Hammon, is back with a new stand-alone novel in the world of her deeply unsettling Nowhere, USA series.

Desperate to get her life back on track, Brianna Haggarty has come home to Nower County to do one thing: make amends by building her grandmother a chicken coop to replace the one she burned down as a pot-smoking teenager. But when she arrives, her grandmother is gone. There’s absolutely nothing in her house — no furniture, not so much as a gum wrapper. The rest of the county’s residents have vanished, too.

Dawson McCade is running for his life, hunted by assassins who would do anything to keep him from testifying. If he can just make it to the safe house in the mountains of Eastern Kentucky … But when he gets there, nobody’s home. They’ve vanished, along with everyone else.

Cade forms an alliance with Brianna.  He’ll help build her chicken house, she’ll keep him safe. And they’ll both try to figure out what malevolent force could possibly snatch a whole county of people off the face of the earth.

Then the killers show up.

Can they survive attacks by trained assassins and find the vanished loved ones they’ve lost?

★★★★★ “I found this book captivating. I fell in love with the two main characters – Brianna Haggarty and Dawson McCade. They form a strange alliance as they both face demons from the past. I want to know more about these two young people and hope that Hammon brings them back in a sequel to this story. I hope it’s not just wishful thinking.” — Bonsterblack

★★★★★ “I’m really glad I found this author. Since reading Road to Nowhere I’ve picked up the rest of the series and The Last Safe Place, also great! This story was part Twilight Zone, part Stephen King (but less ghoulish). I can just hear Rod Serling narrating. A real page turner.” — Sherie

★★★★★ “Ninie has done it again!!! I fell in love with the characters Cade and Brianna from the first chapter. It just gets better and better as you read page after page as well as heart pounding things happening. It was so hard to put down. I absolutely hated the story to end. This is a book you don’t want to miss!! Write on Ninie can’t wait for your next book. Don’t make us wait to long.” — Cora A Myers

★★★★★ “I love Ninie Hammons characters. They become like friends and family. She has such a way with dialogue. I find myself laughing out loud.” — Lollipop

Fans of Justified, Under The Dome, and LOST will love settling down to spend some time in Nowhere USA. Can they survive attacks by trained assassins and bring back the loved ones they’ve lost?

Fans of Justified, Under The Dome, and LOST will feel right at home in Nowhere, USA