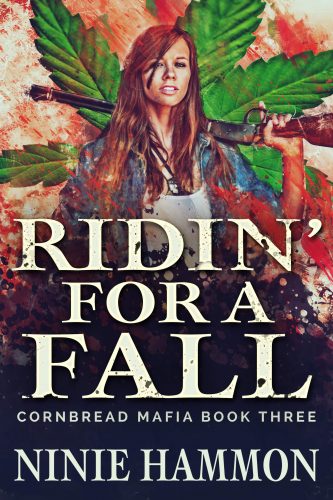 Family loyalties, deadly feuds, and international drug wars are brought to life in Ninie Hammon’s new intergenerational tale inspired by the story of the Cornbread Mafia in rural Kentucky.

The year is 1978. Riley Hannacker is running the Cornbread Mafia and he has expanded it beyond anyone’s wildest dreams. Teams of workers grow weed in eight states. The strains they produce have become the gold standard for marijuana. Some of the seeds, like Righteous Weed, are worth kidnapping, dying, and murdering for.

But their success has not gone unnoticed. An FBI task force sets up an office in Bardstown, Kentucky, and Agent Bradigan has vowed to take the Cornbread Mafia down.

The FBI doesn’t know they’re walking into a buzz saw.

Riley, Jessie Monaghan, and Willie Ray Taggart tried to kill Jackson McClusky five years ago when they found out he’d fired a grenade into a bunker in Vietnam, murdering and maiming their loved ones – but Jackson escaped. Now, he is back, determined to kill the three of them and steal Righteous Weed seeds. He teams up with crime maven Mama Bert, who harbors her own dark, secret murder, and together they use kidnapping and intimidation to get their hands on the seed.

Meanwhile, the county prosecutor, Winona McClusky, and Detective Booth Graham hatch a plot to trick Riley’s promiscuous wife Sherry Lynn into providing information they can use to blackmail Riley for a million dollars, hoping to cash out before the Cornbread Mafia collapses and takes everyone down with it.

Will Agent Bradigan put Riley, Jessie, and Willie Ray behind bars without getting caught in the crossfire? Will any of them survive long enough to see the inside of a prison? Or is the Cornbread Mafia too powerful to defeat?

Ridin’ For A Fall is the third book in Ninie Hammon’s new Cornbread Mafia series, a fictional story inspired by the real Cornbread Mafia that sprang up in picturesque Marion County, Kentucky, and grew into the largest illegal marijuana-growing operation in U.S. history.