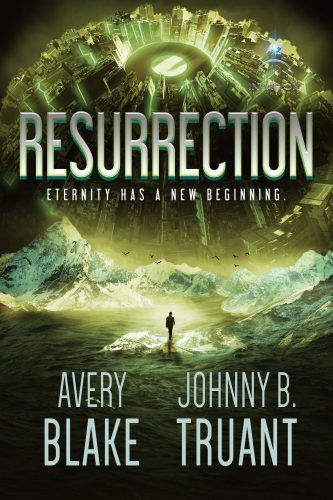 The journey concludes here with the seventh and final book in the blockbuster Alien Invasion series; the breakout sci-fi series with over 1000 5-star reviews.

ETERNITY HAS A NEW BEGINNING…

… or at least, that’s how it was supposed to happen.

In a small desert village without memory, the Lightborn labor unseen — while in the Mullah stronghold beyond, Clara fights an old battle to free the minds of mankind. She’s come up against a wall. She’s fallen into a trap. Then, finally, the walls begin to crumble.

The Astrals linger unseen, unable to leave the planet. But now they face a challenge they’ve never known before: a new human mindscape that persists despite their best efforts to erase it, a will that refuses to die.

The Archetypes rise, but their chore is an impossible one. They must infiltrate the collective on their own terms and perhaps save what little humanity still holds in its grasp … or force the planet’s deadlocked overlords to destroy the human race for good.

★★★★★ “The Best Ever Sci Fi Series on the market. This is an edge of the seat, great story. And, who knows, how far from the truth it really is. There is a very interesting and thoughtful seed planted at the end of book 7…..” — eicy

★★★★★ “Not since reading the BEAM (which I thoroughly enjoyed as well) has a story had me tearing through the pages while at the same time hoping the story wouldn’t end. Bravo, guys. You did it again. Looking forward to many more stories from you!” — Bob Prossenriede

★★★★★ “This has been a terrific read…exciting, unexpected, with an ending I never saw coming. I thoroughly enjoyed every book!” — M. Floeter

★★★★★ “I absolutely loved this book. The way assumptions I made earlier in the series turned out to be a just piece of the puzzle. The way characters evolved and developed. The bit players that ended up being important to the success of the main characters. If you’re reading this review by chance and haven’t started this series I recommend buying them all at once and binge reading.” — Clover J

★★★★★ “Topping the series with cream frosting and a cherry. Dang, these guys can write! The words flow off the page like water from a spring.” — 9wt

This relentless, page-turning tale of colonization and alien empire is the SEVENTH AND FINAL book in the completed Alien Invasion series.