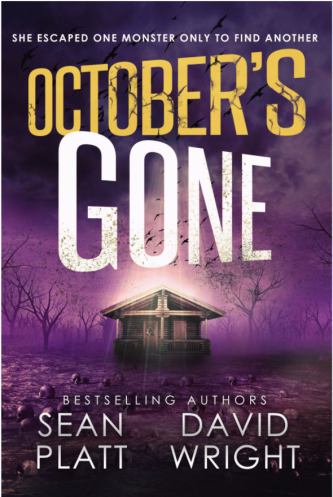 From the bestselling authors of Yesterday’s Gone, Karma Police, WhiteSpace, and more comes a new tense post-apocalyptic thriller that will leave you guessing until the very end.

On October 15, Elizabeth Coombs wakes up from one nightmare to find herself in another …

Her husband and son have gone on a midnight fishing trip and the world outside has changed in subtle but unmistakable ways.

There’s a freak storm, strange lights in the sky, sounds that don’t seem right, and something lurking outside her rental cabin — something that should not be.

At first, Liz tries to tell herself it’s all in her head, symptoms of her mental illness, symptoms she tries to treat with pills. The same pills her abusive husband derides her for taking.

Maybe she’s just on edge because, in two days, she secretly plans to take her son and leave with her best friend, going far away where her husband can never hurt them again.

Everything will be okay, she tells herself.

But then her son returns home alone with no idea where his father is.

Just one problem, she knows her son is lying.

The boy KNOWS what happened. Why isn’t he telling her?

October’s Gone is a new stand-alone book written within the multi-dimensional, post-apocalyptic world of Yesterday’s Gone. Read it today!