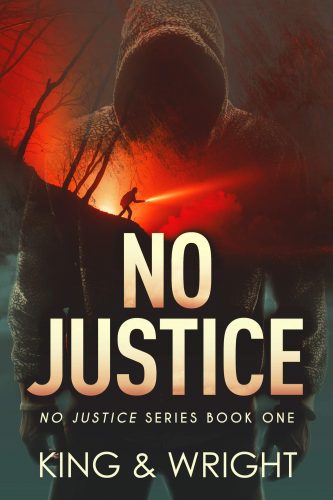 From the bestselling authors of Hidden Justice, 12 and Miserable Lies comes the unforgettable thriller series that blends mystery and suspense into pulse-pounding, revenge-seeking, serial-killing action.

Where her law ends, his justice is only beginning …

Two years ago, detective Mallory Black’s world was shredded when her daughter was murdered by a serial killer with an unspeakable fetish and the truly twisted desire to carry it out.

Now the man who killed Ashley is back, and another child will die unless Mallory can save her in time.

Jasper Parish is a vigilante who punishes killers that have escaped traditional justice. Relying on the psychic visions of his daughter, he wages war from the shadows, doing what the police can’t — or won’t — do.

Two years ago, he failed to save Mallory’s daughter. Now is his chance for redemption.

Hero, killer, and vigilante are on a collision course in a world where there is no justice … unless you’re willing to risk everything in the pursuit of your own.

★★★★★ “This is a superb thriller with a slight paranormal aspect. As usual, great characters. I finished it in two afternoons…very hard to put down.” — J. Bell

★★★★★ “OMG!!! I couldn’t put it down! I felt a connection with the characters but torn between what I actually felt and what I should morally feel. I’m looking forward to the next books in the series. I like that this book does not have a cliff hanger and the rest in the series will be standalone as well.” — JRivera

★★★★★ “This one kept me up all night! I seriously could not put it down. Some parts were hard to read and def stayed with me after I finished.” — Dawna Parks

★★★★★ “I finished it in two afternoons. It’s hard to give a thorough review since I don’t want to give anything away, but I would definitely recommend this book if you like a story that will keep you on the edge of your seat.” — Tammy1963

★★★★★ “All the characters are well developed. The twist at the end came totally unexpected. Can’t wait for the second book in a series.” — Dmitrij P

No Justice is the first book in this pulse-pounding new series for fans of Dexter, Silence of the Lambs, and Seven.