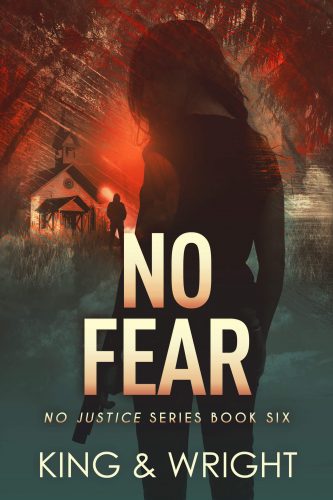 A twisted man who sees demons abducts a child on her way home from church.

What happens next will shock Creek County to its core.

SHE IS RUNNING OUT OF TIME

As detective Mallory Black desperately attempts to find the man’s next victim before it’s too late, she’ll have to fight not only her own demons of addiction but her new boss who still hasn’t forgotten her betrayal, as well as old enemies who are doing everything they can to derail her.

And as if that wasn’t enough, a girl Mallory once saved is back in her life again, with a new complication. Is this Mal’s chance at redemption, at finally having a family again? Or is it just one more person she’ll lose?

Mal will be forced to deal with her demons, her guilt, and a serial killer unlike any she’s faced to survive what’s coming next.

JUSTICE HAS FINALLY COME FOR HIM

Vigilante Jasper Parish has given up. He’s in prison, content to finally pay for his crimes. But now that he’s been robbed of the one thing he had to live for, seeing his daughter, Jordyn.

However, he is soon offered a way to see Jordyn again, but first, he must help a guard expose corruption within the prison. But doing so would mark Jasper for death, just when Mallory needs him most.

SOMETIMES THERE IS NO GREATER FEAR THAN THE MONSTERS INSIDE US

Both Mal and Jasper will be forced to face their darkest fears if they hope to survive the explosive series finale to No Justice.

No Fear is the sixth book in this pulse-pounding new series for fans of Dexter, Silence of the Lambs, and Seven.