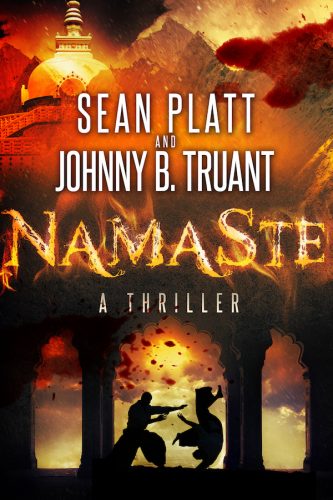 Amit is a member of the order of shadow monks, his every waking moment is spent training his body and mind to the peak of human ability – and beyond. But the order is pacifist, a repository for deadly weapons with their safeties permanently set to “on.” Until everything is taken from him, and Amit decides that turning the other cheek is no longer an option. Now, every ounce of his training will be put to the test. His epic quest for revenge will see wrongs righted – or see Amit forgotten in an unmarked grave.

Namaste includes Prelude, as well as the rest of the adventure. Join Amit as he chases Nisha’s killer from boss to boss, all the way to the last place he ever expected. He will fight, and die if he must. What will be, will be. It’s a Zen thing.

“Having read just about everything that these guys have written (separately and together), I absolutely loved it! Suspense, mystery, mysticism, monks, murder, love, fear, blood, revenge…just about anything you could imagine (all crammed into this one episode!). I’m still trying to wrap my brain around Amit. Do I love him? Do I hate him? Is he justified in his actions or a man gone over the edge? Knowing Sean and Johnny, no matter what I decide, they’ll blow it out of the water! Can’t wait to read more. Well done guys!”

“Screw these guys. I have things to do but I decided to load this just to check out a serial on kindle and now I’m hooked. My dogs need to be fed, I need to change the oil in my car and I’m not sure where my infant son is. But I know where I’ll be for the foreseeable future: sitting on my ass reading the sequels.”

“Sean Platt, Johnny Truant, and David Wright are masters of their craft. They excel at taking all that is good and fun from episodic t.v. and monthly comics and crafting well written stories. Namaste is no exception. A tale of love, loss, and vengeance with their special skewed vision. Like the Punisher main character Amit is almost instantly likable and even before you learn his reasoning you know that he is justified in his pursuit. Like all of the authors books I look forward to the continuing adventures of Amit.”

“In Namaste, Platt and Truant deftly sketch out the background, setting, and characters of their latest serial with minimal description and brief snatches of dialog, keeping the action at a fever pitch in a high-intensity Hong Kong cinema style thriller. Punctuated by scenes of graphic violence, the experiment in non-linear storytelling is effective for this short action-oriented installment. Over the course of a longer story, the back-and-forth narrative flow might grow tedious or confusing, but here the approach lends a filmic flair to the introduction of “a pacifist monk on a rampage.” Fans of Chow Yun Fat or John Woo films looking for a literary equivalent should appreciate this latest Platt & Truant effort.”

˃˃˃ WARNING: Namaste is the most violent thing Realm & Sands has so far written.

An Unlikely Tale of Vengeance Like Nothing You’ve Read!