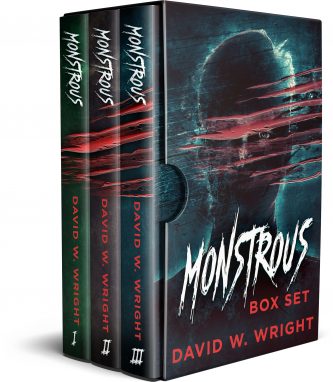 Would You Go Through Hell to Save Your Child?

After years of struggle, Henry Black finally had it all — a loving family and a thriving career as a comedian. Then in one night, it was all ripped away from him when three men murdered his daughter and ended his world.

But death isn’t the end for Henry. When given the chance to return to his wife, he accepts. Except he’s no longer the man he was — or even a man at all.

To match his sins, Henry’s body has been twisted and his mind thrust into darkness.

But the closer he comes to the truth of that fateful night, the more he leaves his humanity behind. Henry is caught in the war between Heaven and Hell and forced to choose between the two things he cares about the most: Vengence and the chance to save his daughter.

Can Henry redeem himself and save his daughter, or will he be damned for all eternity as monstrous?

This box set pulls together all three books in the Monstrous series.