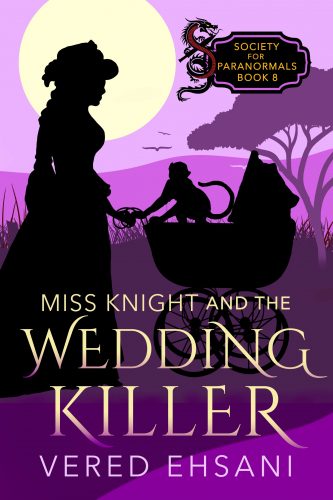 While Beatrice Knight Timmons is part witch, the only thing she’s interested in nowadays is tea, and copious amounts of it. But that isn’t the only thing boiling in her life. No sooner does she open her very own tea shop in the small town of Nairobi, someone with a vendetta against young brides murders one and leaves the body in The Cozy Tea Shoppe. With her best friend’s wedding only weeks away, can Miss Knight stop the murderer while babysitting a monkey and serving difficult customers?

Miss Knight and the Wedding Killer is the eighth case in the “Society for Paranormals” series, where Jane Austen meets Lara Croft in colonial Africa. Join supernatural detective, Miss Knight, as she attempts to keep the kettle hot and her customers satisfied (or at least alive) while dodging murder, mayhem, and other inconveniences. Serving tea has never been more dangerous.