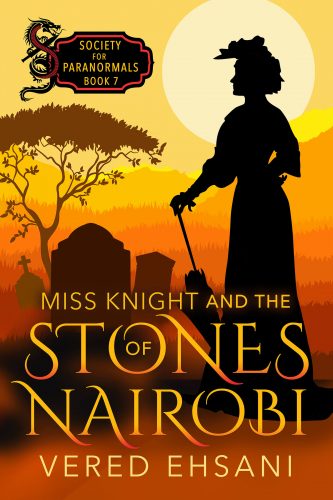 Some stones should never be moved.

Not easily befuddled, the intrepid supernatural sleuth Mrs. Beatrice Knight Timmons can’t fathom how the ancient tombstone of a legendary warrior-king ended up in Nairobi. All she knows is that her life is on the line once again as she embarks on her most dangerous mission yet: to retrieve a corpse and the soul it once housed. Mrs. Timmons may need more than a pot of tea if she wants to solve this case and stop a looming battle from enveloping all of British East Africa. To do so, she’ll have to work with the enemy and learn to read poetry. Then again, who has time for poems with a traitor plotting, an unborn child causing havoc and her husband sitting in prison?

Miss Knight and the Stones of Nairobi is the seventh case in the “Society for Paranormals” series, in which a paranormal detective refuses to let danger, death, and unsolicited suitors inconvenience her in the small town of Nairobi. Welcome to a cozy mystery series concerning Victorian etiquette, African mythology, and the search for a perfect spot of tea.

★★★★★ “So far, this is my favorite of the series. One of the best lines in a book, ever, and I quote, “Stop hissing at the vampires Shelby, and come at once!” — Martha Williams

★★★★★ “Beatrice once again is besieged by a giant alligator, skeletons, Koki, a lovesick brother, a pregnant cousin, a jailed husband and a mama elephant with a long memory. Amidst all this chaos, it’s always time for tea!” — mYbks

★★★★★ “I have a small group of favorite authors whose latest releases I always buy without bothering to read the previews or look at the reviews. Vered Ehsani is one of them.” — Grandma Sandy

★★★★★ “Fans of Beatrice Knight Timmons will devour this novel and wish for more. Mrs. Timmons adds weapons to her arsenal and she needs them in the upcoming battle with an angry dead poet (they can be dangerous). As enemies join together in a epic paranormal battle, the action is fast and deadly.” — Diane Rapp

★★★★★ “I’ve been a fan of Beatrice since the first novel in this delightful series that is laced with equal parts of hair-raising adventures and humor. What drew me to the series were the strong female characters, starting with Beatrice but also including her cousin Lilly and the goddess Koki (she’s the one who can change from praying mantis to raving beauty.) In addition to deliciously inventive plots, each book in the series contains insightful comments into the social mores of late Victorian and early Edwardian times as well as some important commentary on the role of women.” — Mike Billington

If you enjoy historical mysteries, adore Victorian steampunk, appreciate British humor, or would love to experience adventure in colonial Africa, download Miss Knight and the Stones of Nairobi to start your supernatural safari today.