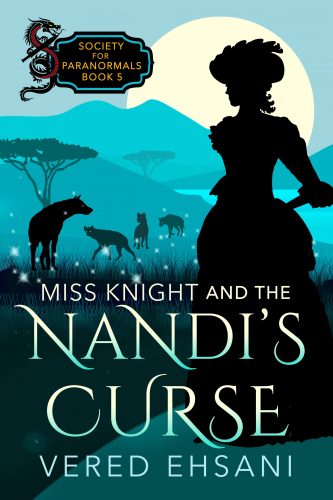 Marital bliss was never this complicated!

Mrs. Beatrice Knight is preparing to start a life of marital bliss, or at least marital satisfaction, with her new husband who fortunately is very much alive and can’t float through walls. While she is no expert on honeymoons, she’s certain that they shouldn’t involve brainless heads, bloodsucking fireflies, and Bubonic Plague.

These however are mere inconveniences, for there’s another threat of greater significance: the Nandi are rising up against their colonial masters and are determined to rid the land of all things British. The intrepid Mrs. Knight faces all this with her usual aplomb, her hefty walking stick and, of course, a pot of tea. But will her marriage survive?

Miss Knight and the Nandi’s Curse is the fifth case in the “Society for Paranormals” series, in which a paranormal detective refuses to let danger, death, and unsolicited suitors inconvenience her in the small town of Nairobi. Welcome to a cozy mystery series concerning Victorian etiquette, African mythology, and the search for a perfect spot of tea.

★★★★★ “Another stellar mystery by a talented author. I read the first four like they were candy. This one is no exception. We are immediately into the setting and characters. Our heroine has mellowed a bit but she is still true to herself. I love the steampunk touches. Dare I hope for a next one in the series?” — Dragon Lady

★★★★★ “This is a wonderful series, and Curse of the Nandi is no exception. Vered’s writing style is beautifully restrained and humorous, the main character is almost Stoic in her thoughts and actions, and she makes a wonderfully complex heroine.” Dana L. Reale

★★★★★ “I love this series. It is original, and I love the British stoicism and sarcasm from these Victorian era characters. Even more, I love Miss Knight’s refusal to follow all the stuffy rules of the Ton.” — Rhonda Jones

★★★★★ “I’m hooked on this series! The clever dialog and extraordinary paranormal characters keep me interested from start to finish. It’s lucky for new readers that each book is a standalone story, but they are extremely addictive. Keep them coming!” — Diane Rapp

★★★★★ “Curse of the Nandi” is an excellent read with elements of a Steampunk adventure, fantasy, and a touch of horror; an intriguing heroine; and a fast-paced narrative. It is a book I highly recommend.” — Mike Billington

If you enjoy historical mysteries, adore Victorian steampunk, appreciate British humor, or would love to experience adventure in colonial Africa, download Miss Knight and the Nandi’s Curse to resume your supernatural safari!