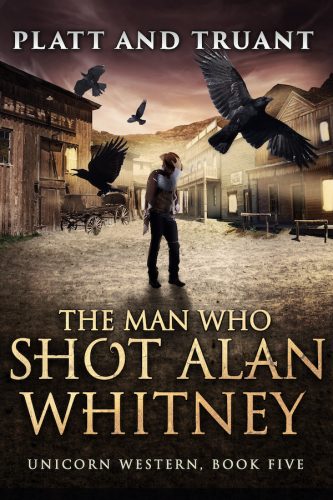 From the bestselling authors of Yesterday’s Gone, The Inevitable, Invasion, and Fat Vampire comes The Man Who Shot Alan Whitney: Unicorn Western Book Five, a reinvention of both the western genre and unicorn lore.

Still pursuing the renegade Marshal Dharma Kold across the Sands before he can recover the Third Orb, Clint and Edward come upon the small town of San Mateo Flats, lawless and crushed under the boot heel of Independence Lee.

Tempted to leave the town to its own devices and pursue their more urgent mission, the pair decide to stay after realizing the Bandit and his Murder may have more to do with the Realm than they ever thought possible…

★★★★★ “Edward the enigmatic unicorn is back to his wonderfully amusing self, Clint meets the Incredible Hulk’s more articulate brother and there’s something about that lawyer I just don’t trust. What was the significance of his poor pedal hygiene? The epic murderous battle was worth five stars alone.” — Demelza Carlton

★★★★★ “I like each of the first four books in this series a lot. However, this has been my favorite one so far. Like the earlier books, it’s got a great story and a lot of very funny parts. I especially like the action scenes in this one. A lot of writers struggle with action scenes, but Platt and Truant do an awesome job with them here.” — Buddy Gott

★★★★★ “The closest thing I can compare the Unicorn Western saga to is The Dark Tower series by Stephen King. While you’ll see some similarity, you won’t find yourself hating the years between wait for some stories that feel like filler. I spent twenty years to finish King’s series. Truant and Platt work MUCH faster without all the fluff.” — Tots4Masses