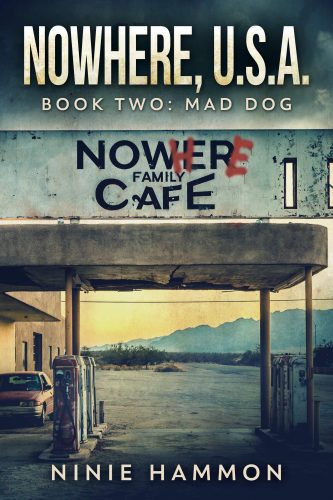 The sorceress of psychological suspense is back with the second book in her highly-anticipated new Nowhere, USA series. Ninie Hammon is at her career-best in Mad Dog — a hair-raising tale that will make you jump and whip your flashlight around at small sounds in the night.

Rabies is a terrible way to die.

When Nower County veterinarian E.J. Hamilton rescues two little girls from the savage attack of a rabid Great Pyrenees, the beast almost rips his leg off. But worse than the injury is the fact that without the vaccine, E.J. will die of rabies within a week. Unfortunately, he can’t get to the hospital because a shimmering mirage called the Jabberwock has locked everyone inside the borders of the county.

With  E.J.’s rabies-clock ticking, childhood friends Charlie, Sam, and Malachi are desperate to solve the mystery of the Jabberwock. Is it somehow connected to what happened to Gideon? Maybe it isn’t just a ghost story that every man, woman, and child in that little town in Fearsome Hollow vanished into a mist one day exactly one hundred years ago?

The “vanishing” has started happening again — residents of Nower are disappearing and the houses they lived in age a century overnight.

If the Jabberwock is gobbling people up, how long before Nower becomes a ghost town?

Mad Dog is the second book in Ninie Hammon’s new series, Nowhere, USA, a riveting psychological thriller about the residents of a forgotten county that inexplicably sinks through reality to find itself the middle of Nowhere.