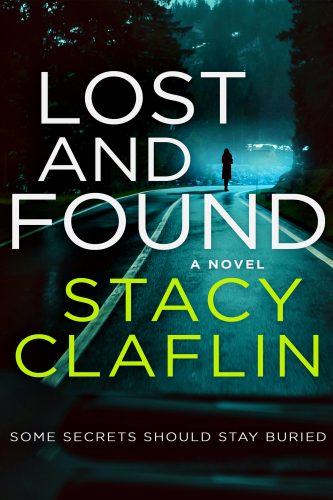 ​​Some secrets should stay buried…

Twenty years ago, Clara’s best friend was brutally murdered. And the killer remains free. Each year on the anniversary of her death, something bad happens to Clara or someone she loves.

She’s convinced the day itself is cursed.

This year is the worst one yet — her husband Shane is arrested for the killing. Not only that, but the arrest reveals a teenage daughter he never told Clara about. And the girl’s mother is accused of the crime along with Shane.

Clara takes in her rebellious stepdaughter while trying to find proof of Shane’s innocence. She relies on old and new allies for help, but when the teen disappears, everyone looks suspect. Including Clara.  Not even she realizes just how much danger they are all in.

Can Clara find the real murderer before he finds her?

Lost and Found is a new stand-alone thriller by USA Today bestselling author Stacy Claflin. If you like heart-pounding tension, page-turning suspense, and twist and turns that you never saw coming, then you’ll love Stacy Claflin’s Lost and Found.