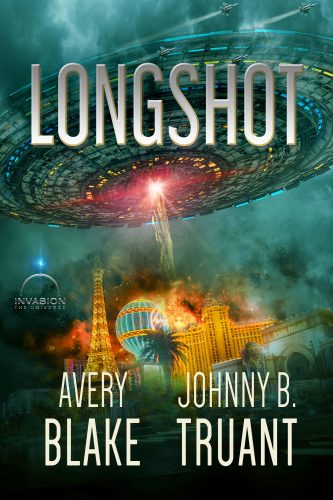 While Las Vegas burns, John Abbot is on fire.

What’s a Gambler to do when the kind of winning streak he’s only ever dreamed about hits just as aliens invade and it looks like the world is coming to an end?

Even while Las Vegas catches fire all around him, John Abbot decides to let it ride. For the first time in his life it feels like he can do no wrong. But it’s gonna take more than a boatload of chips to survive the alien apocalypse. It might even require him to pull together the motley crew of left-over lowlifes and Vegas vagabonds to embark on a high-risk crusade.

In order to get a dying alien to Area 51, and hopefully save the world, John’s only hope is a disillusioned showgirl, a snarky comedian, a cynical slot machine junkie, and the rest of the Las Vegas leftovers.

Unless they die and destroy the universe along the way.

It’s a race against time as the aliens arrive in this new stand-alone book in the Alien Invasion universe.