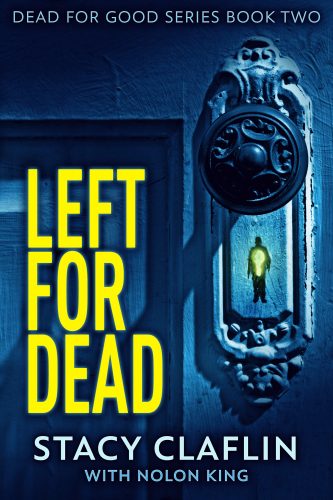 What’s an innocent assassin to do?

Brad Morris was just cleared of murdering one annoying neighbor when another one turns up dead. Luckily, he was at a party with everyone on the block when the body was found, but that doesn’t stop fingers from pointing his way. Especially since the murder weapon was a BlueBlade, the knife company that Brad’s boss, Kurt, uses as a front for the real work that Brad and his fellow assassins do.

Kurt demands that Brad find the real killer — without blowing his cover or dragging BlueBlade into the investigation. If he can’t, he’ll be thrown to the wolves. Or worse, “retired.”

Does one of Brad’s suburban neighbors hate him enough to frame him for murder? Or does he have a much more dangerous enemy lurking within the fellowship of assassins?

Left For Dead is the second book in the new Stacy Claflin and Nolon King thriller series, Dead For Good. Pick up your copy today!