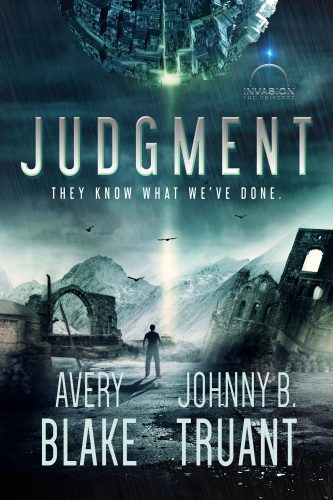 Continue the journey with fifth book in the blockbuster Alien Invasion series; the breakout sci-fi series with over 1000 5-star reviews.

THEY KNOW WHAT WE’VE DONE…

Cameron Bannister and his group of survivors have endured the fall of their great city, gone searching for what they once believed to be a weapon … but found to be something else entirely. It’s something that will decide the fate of all humanity — innocent or guilty — if Cameron can summon the will to start the doomsday clock ticking.

Accompanied by a strange wanderer with a hidden past, they must confront the judgment archive at its new location in the “capital of capitals”: Ember Flats, on the former site of Giza, beyond the infamously unpassable wasteland known as Hell’s Corridor. But when they arrive, all is not as it seems … and the viceroy, along with the secret society hiding within her government, is keeping secrets that keep the city calm — while unrest boils beneath its skin.

When a double-cross threatens the group’s center, only a risky plan might save the species before judgment comes … or bring the walls crashing down as the epoch ends in extinction.

This relentless, page-turning tale of colonization and alien empire is the fifth in the completed Alien Invasion series.