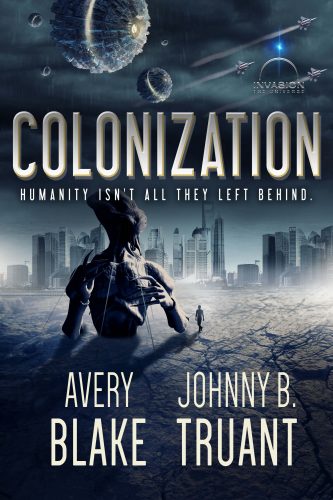 Continue the journey with the third book in the blockbuster Alien Invasion series, the breakout sci-fi series with over 1000 5-star reviews.

HUMANITY ISN’T ALL THEY LEFT BEHIND…

Two years later, the world lives in fragile peace. But a clandestine search has begun … and a clock has started ticking.

Two years after first contact, Astral forces have established their fragile kingdom around the globe. Motherships occupy the cities. Shuttles patrol the lawless outlands. The pacifist class of Astrals known as Titans assist humans in running their alien empire, while bloodthirsty Reptar peacekeepers ensure that order is kept. And unseen in the ships above, a third class of visitor calls the shots — the unseen Divinity, worshipped and feared by citizens in equal measure.

Meyer Dempsey sits on his plinth as Viceroy of Heaven’s Veil, on the old site of Vail, Colorado. As with other Viceroys in the eight other world capitals, humanity’s remains revere Meyer almost as a god.

But below the surface, both colonies and outlands have begun to crumble with unrest.

Until now, the rebellion has been quiet. Now, desperation bubbles as they learn the Astrals have begun digging for an ancient device buried beneath the glowing blue Apex at Heaven’s Veil.

But twin truths of the forthcoming alien war (or a possible alien apocalypse) have dawned at Benjamin Bannister’s facility in Moab, sending plans into action:

The Astrals have lost what they hoped to uncover.

And humanity’s only chance is to find it first.

★★★★★ “This book will have you sitting on the edge constantly, wanting to know what’s going to happen next.” — Vicki W.

★★★★★ “The third is always the best. I can say that with authority since I’m a third myself. But in all seriousness, Colonization is the best of the trilogy.” — Ashlynn Antrobus

★★★★★ “I feel like a broken record when I write about these guys and their books, but I can’t help but say how amazingly entertaining they are! I have yet to read a single book of theirs that I could put down for more than a few minutes at a time, and this is no exception.” — Dana Lane

★★★★★ “Colonization is the third book in the Alien Invasion Series, and it just keeps getting better and better… This book is full of twists and page turning action. The ending will leave you wanting more and I can’t wait to get started with Annihilation.” — Christine

This relentless, page-turning tale of colonization and alien empire is the third in the completed Alien Invasion series.