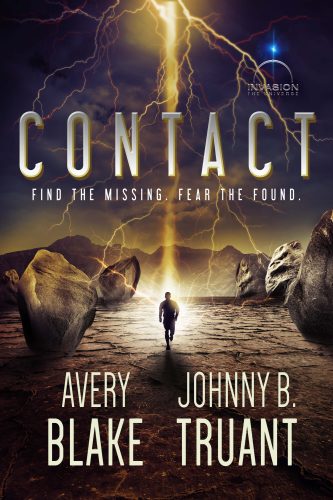 Continue the journey with Book 2 of the blockbuster Alien Invasion series, the breakout sci-fi series with over 1000 5-star reviews.

FIND THE MISSING. FEAR THE FOUND…

Three months have passed since the space fleet’s arrival, but very little has changed in the skies above planet Earth. Motherships still hover without word, impervious to attack and communication. Spherical shuttles still ferry about, their intentions unclear. But the abductions of select humans have ended and most of those taken have been returned — dazed, incoherent, and prophesying glory or doom — but back home where they belong.

Trapped in their besieged bunker outside Vail, Piper, Trevor, Lila, and Heather wait for one of them.

All of this has happened before…

For his entire life, Benjamin Bannister has sought the connections that unite the planet’s wonders: Egypt’s pyramids and Stonehenge, the Band of Holes in Peru, and the Cambay Ruins. For years he’s pursued evidence that extraterrestrial life is not new to Earth, but has left its footprints in the archeological records over and over again. For years, he was dismissed as a fool. But now the spheres have arrived and Benjamin has found his vindication … along with troubling theories as to what it all means.

Benjamin’s research facility rests on a paranormal hotspot in Moab, Utah — but Vail, Colorado is where his interests lie. He’s sent an emissary to Meyer Dempsey’s ranch to find the answer to a question: What makes the Missing Nine so special to the planet’s silent invaders? What news will those Nine bring when they return? And what, as the motherships again begin to move like pieces finding positions on a chessboard, will happen next?

…and it will all happen again.

Vail and Moab, Moab and Vail — two epicenters in the cold alien war. The locations’ fates (and the fates of those bunkered at each) seem somehow intertwined as Earth’s clock ticks toward midnight. The roads and communications have been closed, but now it seems that the planet’s future might depend on a journey from one to the other at all costs. Humanity must find the value of those who have been taken … or become mere fossil evidence for the archaeologists of the future to puzzle over.

★★★★★ “I am addicted to the characters and plot of this sci-fi series! I just can’t seem to put my book down always looking for “what’s next”.” — BoxerMom

★★★★★ “This has got to be made into a movie! I can already see in my mind who would play the characters. Movie, Movie, Movie this would be a box office smash hit for sure!” — Randbubba

★★★★★ “This series has absolutely been one of my favorites… I truly love the pull of our past into our current/future in this story.” — jesdenm

★★★★★ “I could barely contain myself as I waited impatiently for ‘Contact’ to hit stands. It’s here! WOOT! Anyway, totally worth the wait. ‘Contact’ begins with a “BANG!” and immediately starts into the mind-bending twists and turns I love so much from Realm & Sands. I LOVED IT!” — Adam Bailey

★★★★★ “Holy Cr*p I was riveted until the last page… How these guys manage to take an idea as old as sci-fi itself and make it fresh, compelling, and something you can’t put down is beyond me. All I know is they do it every time in every series for me.” — JoniJ

This relentless, page-turning tale of first contact is the second book in the completed Alien Invasion series.