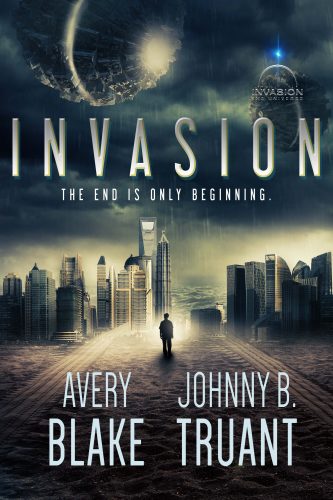 Start the first book in the blockbuster Invasion series; the breakout sci-fi series with over 1000 5-star reviews.

THEY ARE COMING. THE COUNTDOWN HAS BEGUN…

The discovery of objects approaching from Jupiter’s orbit sets humanity on edge, sending cities into panic. Most is unknown, but thanks to the popular Astral space app, everyone knows the few facts the government has tried to hide:

The objects are enormous spheres numbering in the dozens, maybe hundreds. They are on an approach vector toward Earth … and they will arrive in six days.

Entrepreneur Meyer Dempsey is in New York, realizing the time has come to act on all the preparations he’s made without ever consciously knowing why. For years Meyer has been preoccupied with a dreamlike sense of coming peril and knows where he must take his family … if that is, they can make it before society eats itself alive with fear.

The end is only beginning …

★★★★★ “This is a real page-turner. The action is fast paced, with lots of twists and turns. It’s very hard to put down, and I’m pretty much exhausted from staying up every night until the wee hours of the morning.” — DBStevens

★★★★★ “I stayed up late Christmas Eve reading this book; I finished it Christmas morning. I hadn’t planned on doing that. It just sort of happened. Why? The reason’s simple: I couldn’t put it down.” — Terrance A. Crow

★★★★★ “Invasion fully deserves its five stars for its thoughtful and grounded portrayal of life and love under duress. The authors integrated a great deal of prepper culture into the story, and every detail was carefully considered.” — Steven Pratt

★★★★★ “This is clearly the beginning of a huge series, and should be read as such…if you don’t have the patience to watch a complex tapestry of events unfold over several books, you probably don’t want to start this story. If, on the other hand, you LOVE big scifi stories with multiple threads and more than one mystery…you’ll love Invasion.” — B. Johnson

★★★★★ “The tension and suspense is top-notch and kept me reading far into the night. These guys know how to write a thriller, I’m telling you. This is probably the best thriller I’ve read all year. I would pick this book over anything written by Stephen King or Dean Koontz, no question.” — Mark Messick

This relentless, page-turning tale of first contact is the first book in the completed Alien Invasion series.