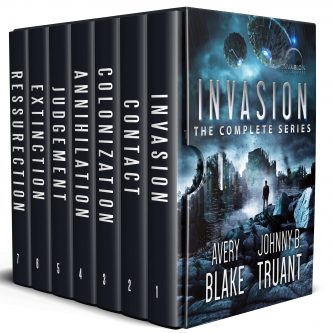 For the first time get the complete collection of all 7 books of the blockbuster Invasion series; the breakout sci-fi series with over 1000 5-star reviews!

THEY ARE COMING. THE COUNTDOWN HAS BEGUN…

The discovery of objects approaching from Jupiter’s orbit sets humanity on edge, sending cities into panic. Most is unknown, but thanks to the popular Astral space app, everyone knows the few facts the government has tried to hide:

The objects are enormous spheres numbering in the dozens, maybe hundreds. They are on an approach vector toward Earth … and they will arrive in six days.

Entrepreneur Meyer Dempsey is in New York, realizing the time has come to act on all the preparations he’s made without ever consciously knowing why. For years Meyer has been preoccupied by a dreamlike sense of coming peril and knows where he must take his family … if that is, they can make it before society eats itself alive with fear.

★★★★★ “Edge of your seat action. Hard to put this one down. I’m a post apocalypse/ alien fan. You will not be disappointed. Movie please!” Designedbymiriam

★★★★★ “This series is better than Any invasion story I have read it takes history, legends, the Bible and mixes it into a fantastic riveting story. If they had more stars I would have given a nine to this series.” sunglasseslady19

★★★★★ “This is a SPECTACULAR series! I read each book as they were released, and each and every one was a page turner that I couldn’t put down. Losing sleep to read this series was absolutely worth it! A must read.” Jim Nugent

★★★★★ “Great characters and plot. Couldn’t put it down. Best science fiction that I have read I a long time. I highly recommend it.” Marvin L. Johnson

★★★★★ “Kept me entertained all the way through. Characters were recognizable humans. Aliens were interesting as was their tech. Will be looking for other books by this team.” dworja

This relentless, page-turning tale of apocalyptic dawn is the complete collection of the seven books that make up the completed Alien Invasion series.