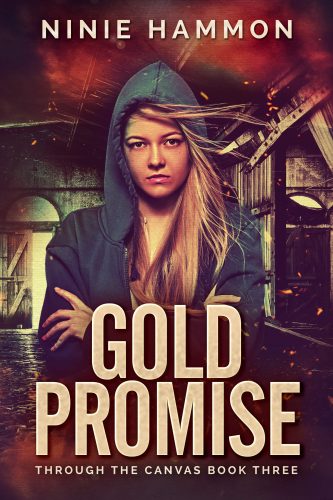 From Ninie Hammon, master of psychological suspense, comes the next installment in a thrilling new series you won’t be able to put down.

Bailey Donahue has finally found a new normal. After leaving her life, her daughter, and everything she has ever known behind to assume a new identity in a bid to stay hidden and alive, she now has three friends and a loyal apricot-colored golden doodle, Sparky, to call her own. She hasn’t suffered through a psychic vision or picked up a paintbrush in months.

That is, until she wakes up on the floor one morning with paintbrushes in her hands and a new terrifying painting on the easel. A teenage girl with a ruined face, and hands wrapped around her neck. Bailey’s “gift”, the ability to paint things that haven’t happened yet, has struck again.

As Bailey’s visions become strange and confused she struggles to hold on to her own sanity while, with the help of T.J., Dobbs and Brice, racing to find the mysterious girl and prevent her murder.

But as the truth begins to reveal itself, they uncover a darker, bigger conspiracy than they could have imagined, racing right back at them.

Can Bailey uncover the truth and save the girl without finding herself in the hands of the same dark enemy?

Discover what thousands of Ninie’s readers already know about her unforgettable five-star work:

★★★★★ “Once again, Ms. Hammon has written a book that pulls you right in and makes you feel as if you’re right there living it! Your heart pounds, your knuckles turn white, and you just can’t put it down!” — Reba

★★★★★ “I’ve read most of Ninie Hammon’s books, and they have had their scary moments, but this one truly terrified me. More than demons from below, more than crawly creatures, more than shape-shifters, these are the most frightening monsters of all.” — Kate Hickey

★★★★★ “As with all of Ninie’s books, they are so descriptive that you feel yourself become part of the world she creates. If you are claustrophobic, like I am, you may feel anxious, short of breath, and feel the need for medical intervention. Don’t say I didn’t warn you…” — May Knott

★★★★★ “Deeply disturbing, exhilarating, fierce, haunting, unpredictable, worthy of my time… these are just a few of the words that to me describe Gold Promise.” — Phyllis W

★★★★★ “Hooked Again!! My heart pounded nearly out of my chest from the first chapter and continued throughout the rest of the book. I was almost gasping for air several times. This is a must-read, a mesmerizing story written in an exceptionally brilliant way. Ninie Hammon has done it again!!” — Cora A. Myers

Gold Promise is the third book in Ninie Hammon’s new series, Through the Canvas. A riveting psychological thriller series about an ordinary woman ripped from her life, and drawn into dark and thrilling tales by mysterious forces she can’t explain.

Authors: Ninie Hammon Series: Through the Canvas Genre: All, Mystery/Thriller/Suspense