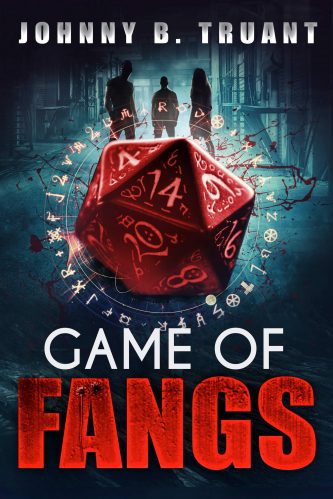 Game of Fangs is a new stand-alone novel in the Fat Vampire universe, from Johnny B. Truant, best-selling author of Invasion, Fat Vampire, and The Inevitable.

When Nora, Orlo, Robert, Amelie, Jaden, Rohit, and Brody form a seven-person team of live-action-role-players to enter a massive three-day Vampire LARP tournament, they have no idea two real vampires will be in the mix, on a mission of their own.

As the gamers play, gathering points and moving upwards through the floors of the convention center, the vampires turn contestants, searching for a lost descendant, and the game gets gruesome and increasingly deadly.

Will amateur vampire hunters be able to sort out the bloody truth from the role-playing fiction and save the still-living from the more-than-dead?

Perfect for fans of Rick Gualtieri’s Tome of Bill or Drew Hayes’ Fred the Vampire Accountant, Game of Fangs tells the story of what happens when a group of vampire-hunting gamers encounters real vampires. Get your copy today!