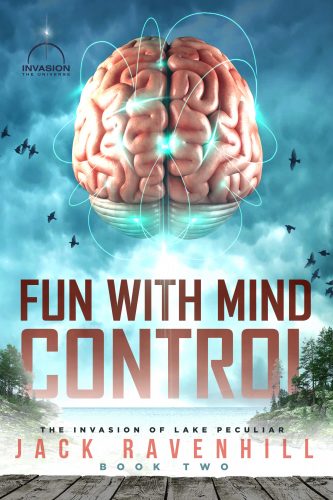 As Gus and his pro-alien faction gain influence with the people of Lake Peculiar, some of the Titans’ mental powers are revealed, but their intentions remain veiled. In his bid to gain control of the town, Gus tries to convince everyone that the psionic gifts from the aliens really are gifts and won’t hurt the townspeople at all.

Conspiracy theorist Ronan Keats thinks he may have found a way to sever people from the alien hive mind without destroying their minds or their lives, but in the process, he gets sucked into the hive mind himself.

Meanwhile, Sam and Journey’s nascent Resistance fights the clock to find an antidote to the Titans’ psionic control. Can they save Ronan and the rest of the town before it’s too late?

Fun With Mind Control is the second book in Jack Ravenhill’s new series, The Invasion of Lake Peculiar, a quirky take on the bestselling Invasion Universe. If you enjoy Garrison Keillor’s Tales from Lake Wobegon, you’ll love Lake Peculiar. Pick up your copy today!