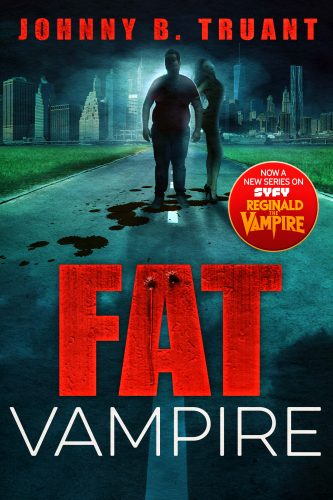 Death Has a Brand New Appetite…

When overweight treadmill salesman Reginald Baskin finally meets a co-worker who doesn’t make fun of him, it’s his own bad luck that tech guy Maurice turns out to be a two-thousand-year-old vampire.

And when Maurice turns Reginald to save his life, it’s just Reginald’s further bad luck that he wakes to discover he’s become the slowest, weakest, most out-of-shape vampire ever created … doomed to “heal” to his corpulent self for all of eternity.

But as Reginald struggles with the downsides of being a fat vampire (too slow to catch people to feed on, mocked by those he tries to glamour, assaulted by his intended prey, and left for undead), he discovers rare powers in himself that few vampires have … and just in time, because the Vampire Council wants him destroyed as an inferior representative of their race.

Read the first book of Johnny B. Truant’s blockbuster series, and you’ll never look at vampires (or vampire stories) the same way again.

Perfect for fans of Rick Gualtieri’s Tome of Bill series or Drew Hayes’ Fred the Vampire Accountant series, Fat Vampire is the story of an unlikely hero who, after having an imperfect eternity shoved into his grease-stained hands, must learn to turn the afterlife’s lemons into tasty lemon danishes. Click to start your new favorite series.