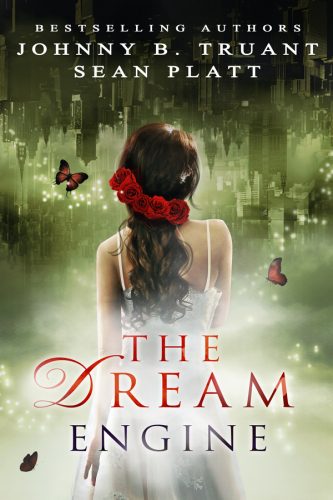 What is real, Eila?

When Eila Doyle first hears the strange boy calling from somewhere deep in her sleep, she begins to question her sanity. In the gleaming steampunk world of Waldron’s Gate, citizens aren’t meant to dream — and those who eschew their daily Crumble and dare to do so anyway face madness … and imprisonment in Joffrey Columns, the asylum of towers.

And yet, “Dreaming” of a very specific sort is what Eila does every day at the Ministry of Manifestation with her mind hooked to the great engine, called the Blunderbuss. She’s accustomed to using her thoughts to Build all that the city needs … but never before have her thoughts been so dark, so laced with demons and shadows. Now those nighttime visions hint at dark conspiracy, a millennium of lies, and a fathomless secret hiding beneath the quiet streets.

As Eila follows the boy down the rabbit hole, she discovers secrets that were meant to remain hidden. She discovers an unknown caste of underlings, an unknown place underneath the city. And she learns of her terrible destiny as her own dreams and reality blur, as “what is real?” becomes something uncertain.

★★★★★ “From beginning to end, I thoroughly enjoyed this book. A nice balance of steampunk meets fantasy and produces a dystopian offspring, with a sprinkling of YA to appeal to a wide range of readers – and you’ve got yourself a great start to series I look forward to exploring.” — Tia Davis

★★★★★ “There are so many things to love about this fantastic steampunk novel that it’s hard to know where to start.” — David Pandolfe

★★★★★ “If you are looking for a great story to read, get The Dream Engine. And then, if you want to see how books are made, check out the Fiction Unboxed project as well.” — Jarkko Laine

★★★★★ “I love The Dream Engine because it has great characters and an intricate and well-executed plot with as many moving parts as the Blunderbuss–the titular dream engine. When I read and listened to this story (I have the audio version as well), I felt truly transported; it was a little jarring to come back to the real world.” — wattsfam

The Dream Engine, book one in The Dream Engine Series, will have you asking yourself “What is real?” along with Eila’s strong female lead — but watch what you ask for, because the answer may unsettle and disturb you for weeks to come. Get all three books in this completed series today.