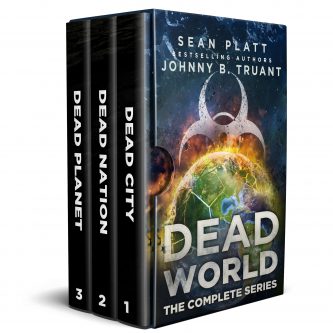 From the bestselling authors of the Invasion and Yesterday’s Gone series comes Dead World: The Complete Series, a gripping biological technothriller that blends real-world genetic engineering and high-stakes corporate espionage to deliver a heart-pumping race against the clock to save humanity from the zombie plague …

This box set brings together, for the first time, all three books in the Dead World Trilogy.

Dead City: One drug saved the world. Now that same drug threatens to destroy it. Necrophage halts the progress of the zombie-plague in its victims’ bodies, but how did Hemisphere find the cure so fast? And why are some necrotics changing?

Dead Nation: The virus has evolved and is spreading again with a new wave of infections, far worse than before. The dead have never been more alive.

Dead Planet: The United States and the United Kingdom are lost to the necrotic plague. Europe, desperate to keep the disease from its shores considers the most drastic of measures: nuking the US and UK to eradicate the disease entirely and start over.

It’s like The Walking Dead meets The Andromeda Strain. Read this clever, intelligent, hard science fiction exploration of the zombie sub-genre in this completed series.