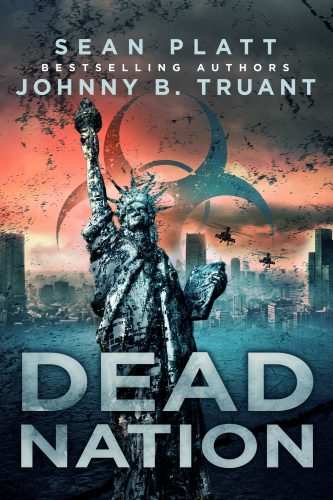 From the bestselling authors of the Invasion and Yesterday’s Gone series comes Dead Nation, a gripping biological technothriller that blends real-world genetic engineering and high-stakes corporate espionage to deliver a heart-pumping race against the clock to save humanity from the zombie plague …

The virus has evolved and is spreading again with a new wave of infections, far worse than before.

Yosemite’s fully-contained zombie population breaks out and now it appears that animals are carrying the infection as well.

The walled-off, zombie-overrun city of Bakersfield is attacked and eventually obliterated, but still there’s no going back as the virus slowly overtakes a nation hell-bent on containing it.

Jordache Dale has heeded Golem’s call and is traveling west, like a Typhoid Mary, leaving a path of viral destruction in her wake.

Bobby Baltimore has gone to Yosemite to repent and live the rest of his life as a zombie.

Park Rangers Brie and Ramon have discovered something they really didn’t want to know, while Parvati Bahl, mayor of the neighboring town works to keep their community from falling apart.

And BDS agents, Krystopher Bryce and Alexander Zakrey are forced to make a new deal with an old devil.

But this time the virus is spreading too fast for anyone to stop. And with Archibald Burgess still up to his old tricks, his evil clarifier henchman wreaking havoc across the nation, and anti-necrotic hate groups popping up across the country, the dead have never been more alive.

Dead Nation is the second book in the Dead World Trilogy, an intelligent, hard science fiction exploration of the zombie sub-genre.