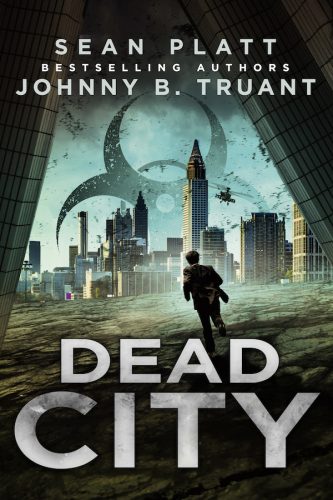 From the bestselling authors of the Invasion and Yesterday’s Gone series comes Dead City, a gripping biological technothriller that blends real-world genetic engineering and high-stakes corporate espionage to deliver a heart-pumping race against the clock to save humanity from the zombie plague…

One drug saved the world. Now, the same drug threatens to destroy it.

Rising star Ian Keys has climbed to the top rungs of pharma giant Hemisphere — creator of Necrophage, the drug that paused the necrotic outbreak and allowed the infected to live among us.

Ian’s new position gives him access to dangerous secrets that could ruin the company. When ominous hints from an anonymous insider set him on the hunt for the biggest secret of all, he discovers that the “cure” the company gave the world might not have been a cure at all.

What would happen if Necrophage failed? Burgess asks. What would become of our society if the disease were allowed to progress again … and all of our well-behaved patients slowly turned feral?

There’s only one person Ian can take his case to: reporter Alice Frank, who’s been trying to blow the whistle on Hemisphere for years.

But is there time to save what’s left of the world … or has the inevitable slide back into chaos already begun?

★★★★★ “I loved everything about this book. Great concept (I’m a pharmacist so I geek out when my sci-fi crosses over into RX land). I love the way it ended…but I want more! I’m definitely a fan of this series and can’t wait for the next book.” — PharmDiva

★★★★★ “Wow. Can’t say I’ve ever read anything like this before, but Platt and Truant didn’t disappoint! While I found the characters’ reactions to be quite plausible, given the scenario, I still had no idea which way it was going to turn.” — Ayme Bahrami

★★★★★ “Dead City is a super fun read with one of the most bad-ass endings in novel history. The set-up for book two is beyond tantalizing. And don’t get me started on how this needs a prequel, like, yesterday. Just sayin’….” — Adam Bailey

★★★★★ “I’ll be honest, I devoured these books. The world that we can just recognize as having been our own is fraught with intrigue; the mechanisms by which events happened are inventive and well thought out; the language and dialogue are crisp and move the story forward; the characters are more multifaceted than you’d imagine, so your judgment of them will change; the overall situation they find themselves in is mind bending; and maybe you think you know who the bad guys are and then whoops! You don’t…” — The Rev Ari

Dead City is the first book in the Dead World Trilogy, an intelligent, hard science fiction exploration of the zombie subgenre.