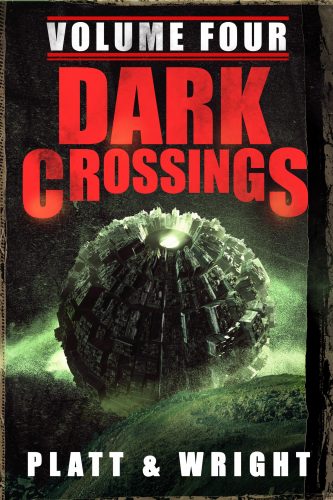 For fans of The Twilight Zone and Black Mirror, Sean Platt and David Wright are back with a collection of Dark Crossings short stories set in a near-future world where aliens are invading. This blend of sci-fi, horror, and thrills will keep you turning pages well into the dark of night.

Coming Home — Escaping from the cult had been the most difficult thing Anika had ever done — until she learns she’d never gotten away at all. When she’s taken to her father’s deathbed, she discovers an even more dire situation is brewing.

The Scout — J’s squadron sends him on a recon mission in the wilderness, but he interacts with the aliens he’s supposed to be observing and forms a tenuous alliance with one of them. When he’s betrayed by both sides, he’s forced to take matters into his own hands — and the consequences could turn deadly.

What Must Be Done — Secrets, lies, and tenuous alliances spark trouble for a trio desperate to be chosen by the invading aliens. Who among them is worthy? And more importantly, what are they being selected for?

The Scarred — A young delinquent’s fear of the police costs him his only friend. He concocts an elaborate scheme to mend fences but finds atonement has a higher price than he expected to pay.

Unnecessary Risks — When a strict set of rules is all that stands between life and death, a man has no choice but to drive away his only ally for breaking them. But when he’s attacked by a band of raiders, he needs her to break the rules to save his life.

And we’ve got five more tales to thrill!

For fans of our series, this collection includes standalone stories set in the world of the Invasion series by Sean Platt and Johnny B. Truant.