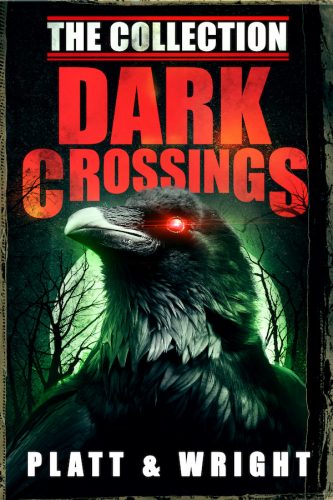 18 short stories and authors’ notes are included here for the first time in one collection totaling more than 186,000 words.

PULL THE TRIGGER — Ellie’s husband owes money to some powerful people. The only way she can save his life is to do one “simple” job — retrieve a mysterious box and kill the courier.

CHRIS WAKES UP — Chris wakes up a zombie, alone, and hungry. As he struggles to hold onto his humanity, he finds himself the unlikely protector of a young girl seeking safety.

RESPERO DINNER — In the not-too-distant future, Xavier is the guest of honor at an exclusive dinner. Respero Dinner is a thought provoking tale of love, loss, and the choices we make in life.

THE VISITOR — Blind and dying, writer Mary Fletcher is waiting out her final days in a nursing home. A mysterious visitor shows up, a visitor who sounds exactly like the love of her life who she believed to be dead.

DINER FADED — Zach hops into his car and hits the open road, eager to put a couple of states between he and his girlfriend. Zach pulls into a diner, hungry and with a gas tank on fumes. He gets more than he ordered and something he may never escape.

THE WATCHER — Since the death of his young daughter, Frank Grimm’s life has completely unravelled. Barely connected with his wife, he now sits in his home office, watching his neighbors live their lives. And when nobody’s looking, he sometimes breaks into their homes. Then one day, he finds a message from a girl in one of the homes:

“PLEASE HELP ME. KILL MY DAD. HE IS RAPING ME.”

ARE WE THERE YET? — Jay is a philanderer on his way to meet a lover. Unfortunately, his jealous GPS has other plans.

IF YOU DON’T FINISH READING THIS, EVERYONE YOU KNOW WILL DIE — Anthony has OCD. He’s convinced that if he doesn’t give into his compulsions, bad things will happen to those around him.

WHAT WOULD BORICIO DO? — Serial killer Boricio Wolfe abides by only two rules:

1) Always use the best ingredients when cooking.

He’s about to break one of those rules.

HIDE AND SEEK — It’s just an ordinary day at the park while young mother, Robin, sneaks off to send sext messages to her lover while she’s supposed to be playing hide and seek with her 4-year old daughter.

But in Dark Crossings, games aren’t for children.

THE GOOD DEEDS SOCIETY — Something weird is happening in the gated community of Evergreen Walk. People are having dreams in which a mysterious woman appears to them, asking them to do good deeds for one another. Everyone seems to be having the dreams except Amy.

MONSTERS — 10-year old Sheldon Harrison is afraid of the monster rumored to live in the woods. But that monster isn’t as scary as the bullies which torment him.

THINGS THAT GO WHIR IN THE NIGHT — 11-year old Sam hears sounds of something happening outside his house late at night. But it’s not until morning that the true terror unfolds!

REBORN — Lissie is a grieving mother who finds solace in the reborn videos posted online by 8-year-old Penny.

A VERY BORICIO CHRISTMAS — Everyone’s favorite serial killer from Yesterday’s Gone is feeling in the holiday spirit, which, of course, has a very different meaning when you’re Boricio Wolfe.

THE WEIRD GIRL — Eddie has a plan to get his life back together. He’s got many sins to atone for, and wants to be a better man, and father. Then he meets The Weird Girl.

THE UGLY TRUTH — Jeff is certain that Becca is cheating on him. If only he can know for certain. He soon finds a solution — a special tea which can help reveal the truth. But if Becca lies, the tea will become poison.