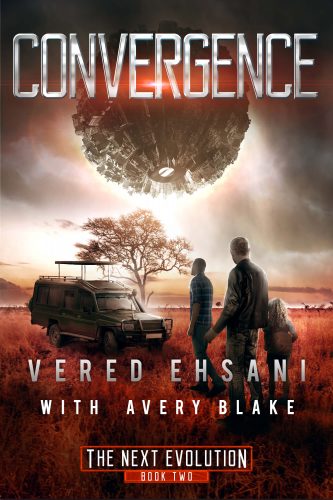 Driving off-road across the African savannah is never easy, especially during an alien invasion. Having a crime lord handcuffed to the steering wheel and a pet monster in the back seat, definitely doesn’t help.

Pursued by both the local army and the aliens, Trisha also has to worry about her daughter Celine’s growing powers. If Celine can stay alive long enough to learn how they work, they just might survive. So they’re racing for Mt. Kenya, hoping to find safe haven.

Problem is, they aren’t the only ones.

A great migration is in motion: animals, humans, and aliens seeking a mythical place where gods and demons are resurrected. All paths converge on the mountain — but some of those paths are definitely, dangerously wrong.

Convergence is the second book in the Avery Blake and Vered Ehsani series, The Next Evolution. Discover your new favorite SciFi series today!