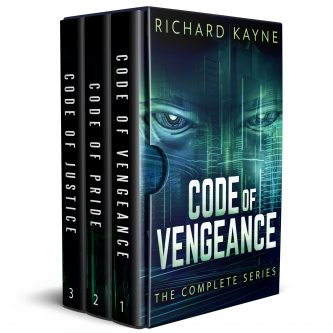 In the mid 21st century, humans succeed in creating our final invention: artificial intelligence. But intelligence can’t be controlled, and as AI makes leaps and bounds ahead of its human creators, humans fight to prevent a war against their own creations. Can we coexist, or will we be the engineers of our own extinction? Welcome to the world of The Inevitable.

This collection contains the entire Code of Vengeance trilogy:

Code of Vengeance: Haunted by their pasts. Pursued by terrorists. The future at stake.

Rescued from violent assault by a robot on the run, Nat strikes up and unlikely partnership with Br00-s. As she learns more about the enigmatic robot, she beings to suspect his secret — a secret that could change the course of the future if the world finds out. But she has secrets of her own to protect.

Pursued by a relentless homicide detective and a terrorist organization that will stop at nothing to see the end of all robotics, Br00-S and Nat race to find the truth behind a conspiracy that has been building for years. Can they uncover the truth before their own secrets come to light, destroying them forever?

Code of Pride: A new goal and a new leader who will stop at nothing.

Br00-S patrols the rooftops and alleys of his city, finding solace in protecting the innocent. Meanwhile, Nat begins to wonder whether it’s time to move beyond revenge and start giving back to her community.

Then Nat stumbles upon a conspiracy. Far from destroying the Sapiens First terrorist movement, they have strengthened it and given it a new goal and a new leader.

The revelation is punctuated by the arrival of Drake, an ex-special forces operative who is smarter, stronger, and more determined than any foe they’ve met yet. He won’t stop until the robots, and the humans who support them, are gone from the world for good.

Code of Justice: What must be sacrificed for the hope of the future?

Diamond Carter has become a battleground between those who seek to remove AI violently from their lives and those who work toward a more peaceful solution.

The conflict between Sapiens First and its enemies reaches its climax. Both sides commit all their resources to the final battle.

Nat is caught in the middle of the firestorm. How much is she willing to sacrifice for a better tomorrow?

Richard Kayne’s Code of Vengeance trilogy is written in the Platt and Truant world of The Inevitable — a unique take on dystopian science fiction which combines the spark of uprising and war with surprising insights into the human condition … through artificial eyes.