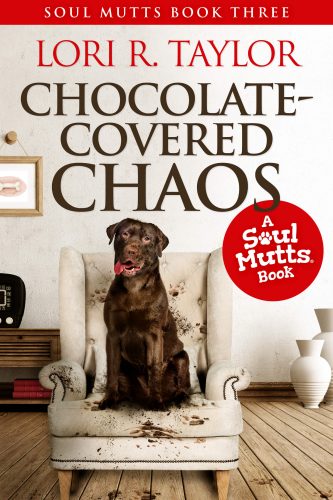 Since Nick Marshall’s wife died, he’s been struggling to keep a lid on his PTSD and raise his stepdaughter Chloe and her younger half-sister, Abby. He’s always run a tight ship, but when he learns that Chloe’s flunking out, he becomes even more rigid and controlling: no extracurricular activities, just chores and schoolwork until she brings her grades up.

It’s only after she gets into a fight at school that he realizes there’s a deeper problem that he has no idea how to handle. Worse, his late wife’s sister is working with Chloe’s biological father to take custody away from him.

Out of desperation, he takes her teacher’s suggestion and brings home a dog from the Pretty Paws Shelter named Max. The girls bond with Max, but the dog’s playful enthusiasm drives Nick crazy — he craves calm, not chaos.

Can Max help Nick reconnect with Chloe before her meddling aunt and deadbeat father split the family for good?

Chocolate-Covered Chaos is the third book in the Soul Mutts series, heartwarming stories of lost dogs finding new homes with the humans they were born to heal.