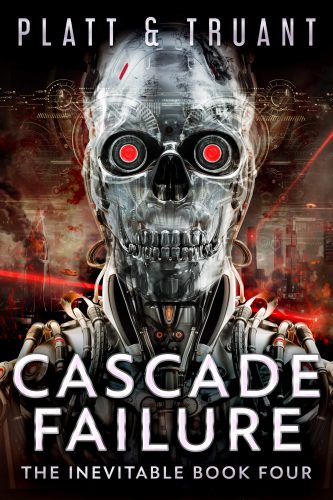 The Hard Reset was first botched then blocked by a brutal murder. Now President Zelda Blake and her assistant Lincoln must try and sift through the wreckage to make another attempt. Blake will do anything to convince the masses that they must rebel, even if it costs her own life.

Meanwhile, Chantal and her growing army of sexbots and outcasts embark on a critical quest of their own, determined to save their kind and guided by the voice of a mysterious messiah inside Chantal’s mind.

When smugglers bring a world-destroying device from Oceana to United Earth, Emerson sees his chance to end all human life, so the robots can inherit the planet that is now rightfully theirs.

Human and Machine are now in a final battle of wills, and only one will survive.

Cascade Failure is the fourth book in the world of THE INEVITABLE — a unique take on dystopian science fiction that combines the spark of uprising and war with surprising insights into the human condition … through artificial eyes.