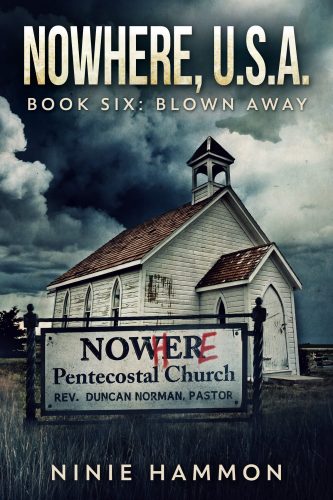 The sorceress of psychological suspense is back with the sixth book in her highly-anticipated new Nowhere, USA series. Ninie Hammon is at her career-best in Blown Away — a story that keeps you guessing even as the secrets are revealed.

Viola Tackett’s oldest son plays a childish game with disastrous results. What might have remained a personal tragedy, blossoms into a town-wide catastrophe when he lies to his mother about what happened. Now Viola Tackett is hatching a diabolical plot to get revenge. Her plan endangers the life of every man, woman, and child in Nowhere County.

Meanwhile, the Reverend Duncan Norman believes he’s figured out who murdered his daughter from the clues in her diary, and he has no plans to turn the other cheek. When he goes in search of an eye for an eye, he’s not willing to hear that he might have the wrong guy.

As the residents of Nowere County squabble among themselves and kill each other, The Jabberwock keeps on silently picking them off one by one.

Time is running out for everyone.

Blown Away is the sixth book in Ninie Hammon’s new series, Nowhere, USA, a riveting psychological thriller about the residents of a forgotten county that inexplicably sinks through reality to find itself in the middle of Nowhere.