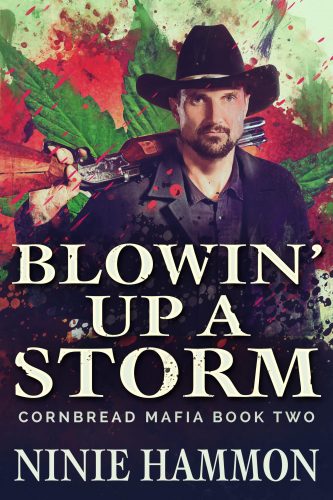 Family loyalties, deadly feuds, and international drug wars are brought to life in Ninie Hammon’s new intergenerational tale inspired by the story of the Cornbread Mafia in rural Kentucky.

Nobody knows what started the feud between the Hannackers and the McCluskys, but they’ve been enemies for generations. Now that the cash crop of choice for both is marijuana, the stakes have risen – and Riley Hannacker joins other Vietnam vets from Callison County to form a marijuana-growing co-op called the Cornbread Mafia.

But Jackson McClusky harbors a dark secret from the war. It was he, and not the Cong, who fired that rocket into a bunker, killing and maiming his buddies. When Riley begins to remember what happened, Jackson sets out to kill them all.

It’s not just Jackson plotting their deaths. They outsmarted Kentucky State Police Detective Booth Graham — now he is out for blood. And a competing Colombian drug cartel is sending a hit squad to wipe out the whole Cornbread Mafia in a hail of gunfire.

Will the death plots by the McCluskys and the law succeed? Can they survive the cartel’s attack? And can they pull off an elaborate ruse to prevent future bloodshed by convincing all the South Americans that a handful of former soldiers is really an army of ruthless, blood-thirsty hillbillies? Will the other drug cartels buy the hoax? Will they believe the Cornbread Mafia really is the meanest dog in the junkyard?

Blowin’ Up A Storm is the second book in Ninie Hammon’s new Cornbread Mafia series, a fictional story inspired by the real Cornbread Mafia that sprang up in picturesque Marion County, Kentucky, and grew into the largest illegal marijuana-growing operation in U.S. history.