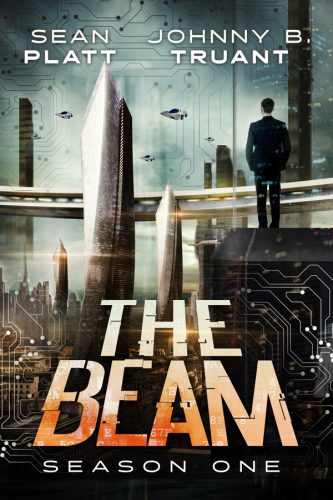 From the bestselling authors of the Invasion and Yesterday’s Gone series comes The Beam, a disturbing philosophical exploration of the future of our hyperconnected world. This chilling, intricately plotted series is set in a futuristic dystopia where politics and technology have widened the gap between haves and have-nots.

All of humanity is connected … to The Beam and to the lie.

In the year 2097, the only stable nation is the NAU: a dystopia exploding with new technologies and ruled by two political parties. The choices are Enterprise (sink-or-swim; effort and luck determine whether members prosper or starve) or Directorate, where members are guaranteed safety but can never rise above their station.

Above it all is The Beam: an AI-built computer network that serves every whim and connects citizens through implants and biological add-ons.

The Beam anticipates every need and has created a world within the world. It permeates everything. And is everywhere.

But the NAU’s power is shifting. New powers are making their moves while others hang in the balance.

Behind it all, a shadowy group is pulling strings, and guiding the upcoming election exactly where they want it to go. The Beam is coming alive; immersion is as real as reality. If the NAU’s power goes unchecked, the actions of a shadowy few will shape the fate of millions forever.

★★★★★ “This series is one of the best from these authors, which is saying a lot because Sean Platt/Johnny B. Truant/David Wright (any combination of the three) are by far my favorite authors. The Beam is an extremely complex world with complex characters.” — Matt Browner

★★★★★ “I’d have to say this series has them all beat because all the technologies (or magic, if you will) in this series are better developed, the characters are more involved, and the story lines are better woven. And I’m not talking about twists and turns in the plot that require suspending disbelief (yeah right), or leave you confused as to what happened. It’s pretty amazing and thought-provoking.” — Burton Kent

★★★★★ “Season I spans over a century and never have I come across a sci-fi novel that incorporated everything from 80’s sitcoms (liek Three’s Company!) to advanced near-22nd century nanobot transhumanism. The storyline unfolds and unwinds and hovers all at the same time based on a handful of some very detailed characters who all have their own philosophical and political ambitions.” — Marc Howard

★★★★★ “I really love the rich and expansive world that’s been created in The Beam and I’ve already purchased the 2nd season so I can continue reading on. The story shows examples of both the good and bad that technology and connectivity can have in people’s lives. It was very interesting as well as thought-provoking.” — James Hodyl

★★★★★ “The Beam: Season One was amazing. I only had a vague idea of what it was about before reading, and I’m glad about that now. The characters are so well-drawn and developed, the world is rich and full of depth, and the story is multi-layered and works on many levels (adventure, character, philosophical).” — reesha mouse

Platt and Truant deliver deep political intrigue and incisive social commentary along with a generous helping of big philosophical themes through engaging, multifaceted characters and rich worldbuilding. If you enjoyed Altered Carbon and The Fifth Element, you’ll feel right at home in the world of The Beam.