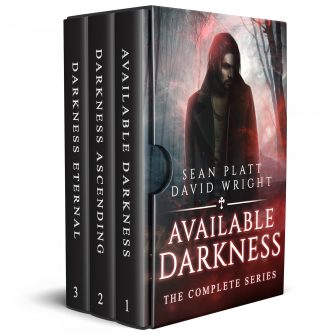 From Available Darkness Book One:

A man wakes in a coffin with no memory of the past. The only clue to his identity is a note: “Avoid the sunlight and don’t touch anybody.”

Just hours later, he’s questioning more than just his name as he stands over a charred corpse, dead with just a touch.

Hunted by the FBI, and haunted by the evil of his forgotten past, he must learn to control the darkness within himself before he destroys the child who may be his only hope to remember.

Little does he know the secrets locked in his head hold the key to a conspiracy stretching back thousands of years across two worlds.

The fate of past, present, and future collide as the hours of AVAILABLE DARKNESS tick away while humanity is threatened by a force stronger than the world has ever seen.

Praise for the Available Darkness Series

“These guys write in a way that keeps you turning pages (too late at night) and wanting more of each story they do.” – Dave Horton

“One of my favorite series books in their collection definitely leaves you hungry for more. These two authors have consistently produced one great read after the other.” – Jellydnut