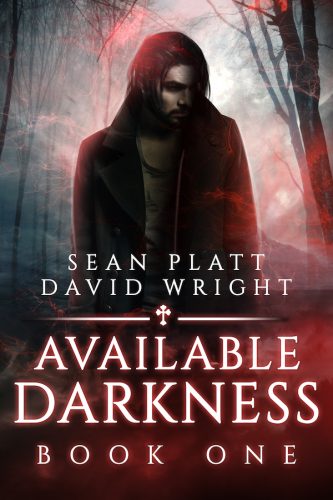 From the bestselling authors of Yesterday’s Gone, No Justice, and The Karma Police series comes Available Darkness, a character-driven reinvention of the vampire story.

A man wakes in a coffin with no memory of the past. The only clue to his identity is a note: “Avoid the sunlight and don’t touch anybody.”

Just hours later, he’s questioning more than just his name as he stands over the charred corpse, dead with just a touch.

Hunted by the FBI, and haunted by the evil of his forgotten past, he must learn to control the darkness within himself before he destroys the child who may be his only hope to remember.

Little does he know the secrets locked in his head hold the key to a conspiracy stretching back thousands of years across two worlds.

The fate of the past, the present, and the future collide as the hours of AVAILABLE DARKNESS tick away while humanity is threatened by a force stronger than the world has ever seen.

★★★★★ “I had no idea how vast, imaginative, and incredible of a world I was diving into when I bought this book. At the halfway mark, I went and got the second one because I knew I would want to start it immediately.” — Christian Burch

★★★★★ “I was a little skeptical at first because the “vampire thing” has been pretty worn out … good thing it was far from the same old thing! I loved the way the authors pulled together the separate storylines as they revealed each character’s history.” — jenyeart

★★★★★ “It is a new take on the vampire theme but done with much more thought and without the teenage angst. I soon read everything written by these authors and have not left disappointed!! You must read these serials! Great character development and the suspense twists your stomach!!” — C. Cox

★★★★★ “I greedily read this story, turning pages as fast as I could. These guys are able to paint such a clear, vivid picture – you are in the story! I’ve read everything they’ve written and eagerly await what’s next in everything!” — kellie nieves

★★★★★ “By the time I read thru half of this episode I ended up hooked…yet again…on another Wright/Platt serial ebook!!!” — cortrex

Available Darkness: Book 1 is the first book in the 3-Book Available Darkness series, a paranoid, page-turner populated by characters you won’t want to stop spending time with. It’s a cat and mouse cop story, between a cop on the hunt for a supernatural serial killer, and an amnesiac vampire. Read the entire completed series today.