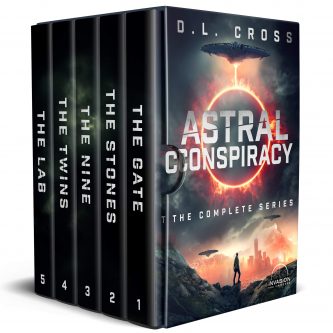 This collection contains all five books in the Astral Conspiracy series:

The Gate: Landon Thorne is a disgraced archaeologist, a laughing stock in his field because of his unconventional beliefs — he’s an ancient astronaut theorist. No one takes him seriously. Until an alien armada targets Earth. Now Landon’s in high demand by the U.S. government. And someone far more sinister.

The Stones: Landon Thorne belongs to an elite group: he’s one of the few people who have ever accessed the Akashic Record. He discovers a weapon that could defend the Earth. The Astrals want to stop him. The government wants to control him. Even his allies are hiding something.

The Nine: Landon Thorne is convinced the key to defeating the Astrals is in the vault — a repository of ancient artifacts, origins unknown, covered with undeciphered glyphs. He’s also convinced he’s the one person on the planet who can translate the markings. But strange, frightening things happen every time he gets close to the relics.

The Twins: Landon Thorne was abducted by the Astrals. But Reverie Sterling doesn’t have time to dwell on his absence. She has twins to raise in a dystopian world. Twins with psychic powers.

The Lab: Time is running out for the planet. The twins insist on traveling to Illinois to find Jovian, their grandfather. He’s been communicating with them telepathically and promises he has all the answers the Resistance has been searching for. He does, but they come at a cost. A steep cost.

The Astral Conspiracy series is a taut, fast-paced Indiana Jones meets Falling Skies style thriller that spans the globe and digs deep into humanity’s past, unearthing mysterious artifacts and clues to aliens’ motives for invading our world. It is set in the world of Platt and Truant’s groundbreaking Alien Invasion Universe – the original series with over 1000 5-star reviews.

D.L. Cross has a flair for high-stakes, heart-pounding thrillers that will keep you up late into the night. Read the entire Astral Conspiracy series today!