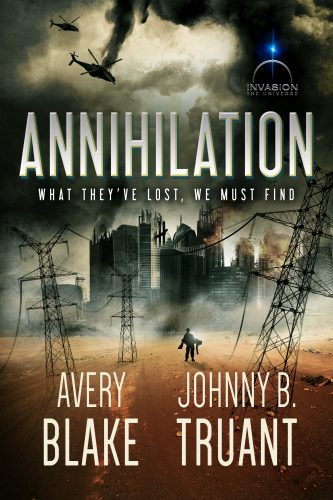 Continue the journey with Book 4 of the blockbuster Alien Invasion series; the breakout sci-fi series with over 1000 5-star reviews.

WHAT THEY HAVE LOST, WE MUST FIND…

The resistance has nearly been wiped out, its numbers reduced to a scant fraction of what they once were. Meyer has fallen. With hope nearly a memory, something must turn the tide of war.

A deadly weapon, known only as Thor’s Hammer, brings the promise of salvation. Now, the scattered remnants of the human race must find the device and recover it before the aliens can discover its location. Because if the rampaging Astral forces beat them to the weapon, the fate of Earth will be sealed.

Fight for hope. Search for survival.

★★★★★ “This Christmas, because of Annihilation, I slept way less than I would have, otherwise. I simply couldn’t put the book down as I had to know what happens next.” — Jarkko Laine

★★★★★ “Some series level off after a few books, but this series just keeps on surprising me! If a book leaves me breathless, then I know it’s done it’s job… Love where this series is going!” — Beth Farrar

★★★★★ “I haven’t gotten much sleep since I received my copy of Annihilation. Great twists and turns keep you guessing and riveted throughout!” — Christine

★★★★★ “Book 3 left me in tatters, with a “WTF just happened!?” look on my face. As I sat there in the afterglow of a kick-ass story — settling into the fact that it would be many months before the next book came out — I was reminded once again of why I love to read so much! Well, the wait is over, and as soon as book 4 came out I devoured it instantly. And here I am again, just hours later, waiting for the next book to come out. 😀 God I love a great story!” — Adam Bailey

This relentless, page-turning tale of colonization and alien empire is the fourth in the completed Alien Invasion series.