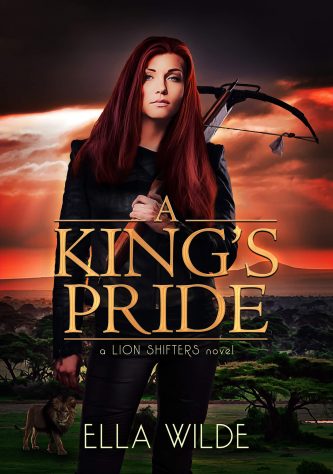 Emma Knight is leaving Kenya as soon as the witch is buried.

But hostile forces are pushing her into a role she doesn’t want.

When Emma breaks a cardinal rule and rescues a lion Shifter, she finds herself at a dangerous crossroads. Does she move on, or risk her secrets and her heart to save the lion’s Pride and establish peace in Nairobi?

Lion Shifter King David Kiprop is on a time-sensitive mission, one that leads him into a poacher’s snare. While he’s relieved to escape the trap, he’s not happy to owe a life-debt to the snarky, secretive female who rescued him, even if he does find Emma attractive. She’s a bewitching distraction King can’t afford.

Too bad the gods have other plans …

Join the Kiprop Pride and escape to a land where everything is possible. A King’s Pride is the first book in Ella Wilde’s “The Lion Shifters” series. Start your adventure today!