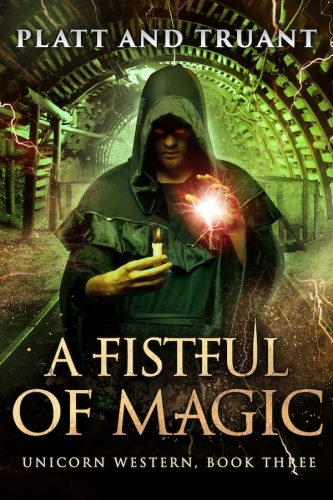 From the bestselling authors of Yesterday’s Gone, The Inevitable, Invasion, and Fat Vampire comes A Fistful of Magic: Unicorn Western Book Three a reinvention of both the western genre and unicorn lore.

After pursuing Dharma Kold and his captive Mai to the holy town of Precipice, Clint and his unicorn Edward find the dusty village possessed — subdued by two warring bosses who are both looking for an ancient and powerful artifact. One of the factions is being controlled by Kold’s dark magic, but the other, it seems, might be even more dangerous.

Edward has warned that the Orb of Malevolence, in the wrong hands, would be lethal to the very fabric of the world, so Clint and Edward must get in the middle of the two dark and vying factions and find the Orb first… or die trying.

★★★★★ “Without question, I was surprised at how much I enjoyed the writing. The main character, Edward, is a unicorn. I say this, because though our hero is Clint, the gunslinger, he is cast in the role of sidekick. It is a fun dynamic between the two. The writing is top notch and at times seems to hint at Douglas Adams.” — Brian D. Meeks

★★★★★ “I flew through this episode/book as if I were starving…and in a way I was. Finished the first two and couldn’t wait for #3. Luckily I didn’t have long to wait. LOVE, LOVE, LOVE Edward, Clint and heck, even the bad guys!” — Jkaustin02

★★★★★ “Well-written and engaging. Excellent climax. A large part of this book is an homage to A Fistful of Dollars, and it is done extremely well, in a way that invokes the original, but treads on totally new ground (especially the final battle—unforgettable!). Well worth your time.” — Michael Elliot

★★★★★ “Holy mindfuck Batman! Not to sound creepy but your brains are now on magnificent display in MY mind palace. Thanks for the awesome reads.” — Billie Goodman

A Fistful of Magic is book three in the 9-book Unicorn Western Series. It’s like Stephen King’s The Dark Tower, but with more magic, more fun, and more turkey pie. Read the entire completed series today!